While the battle between DMW and Golden Boy Records is still on, Davido has decided to finally settle all the rumors going around of Ifeanyi not being his son.

Recall that in the heat of the argument between the DMW Boss and King Patrick of Golden boy records,

it was revealed that Peruzzi and Chioma aren’t really cousins, but Exes.

The news came as a shock to many fans, who had actually thought both Chioma and Peruzzi were related for real.

The tweet carried a message, apologizing to Kemi Olunloyo, while stating that He (Davido) is not sure whether Ifeanyi is really His son.

Well Davido has finally addressed those rumors in a message posted on his insta story on tuesday.

He wrote, “Any of you the believes that fake photoshopped tweet going round of me talking nonsense about my son cant be stable !! Lmao Kaisocial media!! I hail!” 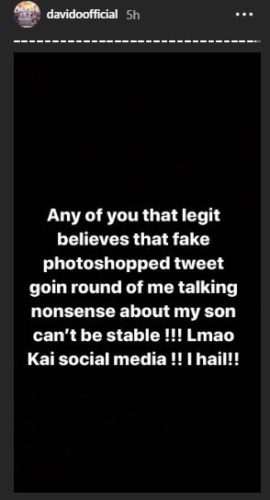