It’s a mixture of good and bad news as the Covid19 war continues in Nigeria.

On Monday, the Minister of Health Announced the second death in the country.

According to him, the case had severe underlying illnesss and could not withstand the virus.

Meanhwile Nigeria’s case of Covid19 has increased to 131, after 20 new cases was confirmed in the country.

Good news though is that the index case in Oyo has tested negative as well as 5 cases have been discharged from the Lagos Centre for disease control.

On the 20 newly confirmed cases, the agency, 13 cases were confirmed in Lagos, 4 in FCT, 2 in Kaduna and 1 in Oyo State. This brings the total number of cases to 131 in Nigeria. 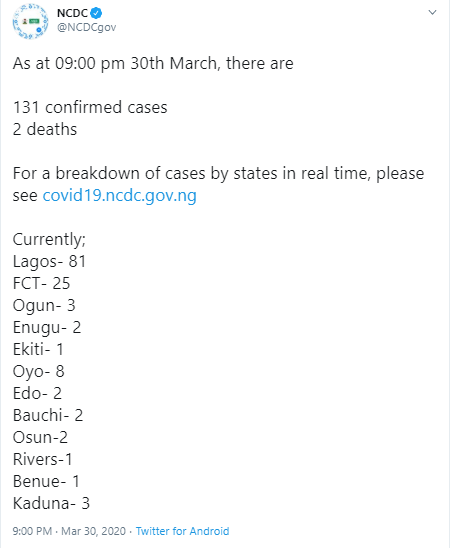