At least three persons have been shot and stabbed at Opolo Ward 5 in Yenagoa, Bayelsa State during Saturday’s poll by suspected political thugs.

Those injured had been rushed to the Federal Medical Centre, Yenagoa for treatment.

Our Correspondent ran into women in peaceful protest against an alleged invasion by party thugs who invaded various polling units carrying dangerous weapons and shooting sporadically. 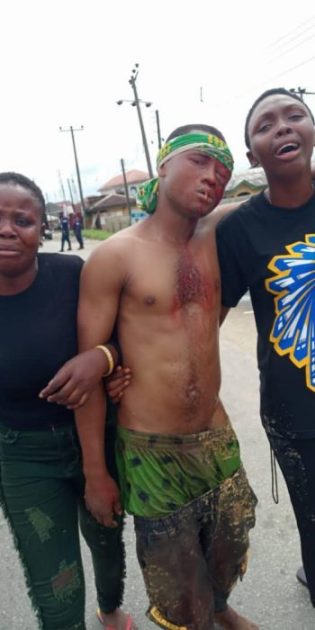 One of the victim

They carried various placards with various inscriptions, which read, “No elections in Ward 5.” “Federal Government, Come to our aid,” “We have been denied our rights to vote in Ward 5.” among others.

Doris, one of the leaders of the protesting women told our Correspondent that One Pere and another person simply called Prince were shot, while an elderly man was stabbed on the leg.

The women were protesting in the presence of the Police at the time of time our Correspondent ran into them.

They accused security agencies of allegedly giving covers to the rampaging armed thugs to chase out those they felt would not vote for their preferred candidate.

Also, there was skirmish at Agudama Epie Unit 9 Ward 4 where a suspected party agent was chased away and was nearly mobbed until policemen on patrol rescued him.

He was rescued by policemen on election duty.

A mild drama ensured when the photographs our Correspondent took when the party agent was being rescued by a team of policemen led by an Assistant Superintendent of Police, ASP, were forcefully deleted by the policemen who initially seized the mobile phone but released after appeal. 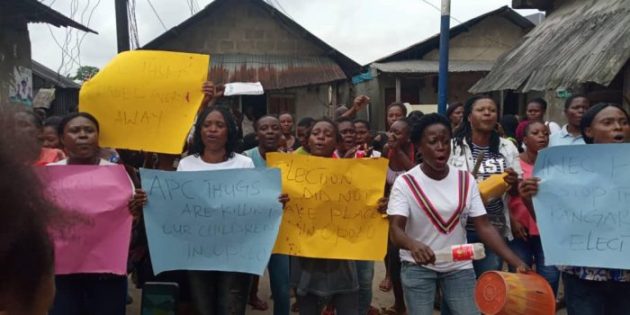 “We didn’t say you should not do your job as Journalists, because I am doing mine by rescuing the Party Agent, but don’t take my picture,” he said.

In Toru-Orua in Sagbama Local government area, Governor Seriake Dickson could not vote as scheduled because his polling unit was submerged by flood.

An ad-hoc arrangements were made for him and his wife to vote.

After casting his vote, he complained of reported cases of violence in some parts of the state.

In Tombia and Amassoma, the village of the late Diepreye Alamieyeseigha, the former Governor of Bayelsa State, visited by our Correspondent, election was peaceful.

“Send the Old Generation out of Government” – Obasanjo to Youths

“He evaded the Law, but Couldn’t Beat Death” – Obasanjo Reacts...

Legacy TV - August 14, 2020
0
The Herbal Drink produced by Madagascar that allegedly boost immune system and also prevents being infected with Covid19 has failed The country has in recent...