Nollywood actor, Mike Godson has written an open letter to the Vice President, Yemi Osinbanjo, as he reveals he cannot feed.

The actor wrote this letter while reacting to the 15billion naira government said they used to feed and provide for the poor.

Mike Godson who claimed not to have any food at home called on the Vice President to send his own portion of the money.

The actor says that Going out to look for food is not possible, due to fear of being arrested by the task force.

“Your exellency the vice president federal republic of NIGERIA.

“Dear sir, My name is “Mike Godson” I’m a Nigerian Actor with the Nigerian film industry.

“Sir, We have been instructed by the federal and state government

to strictly avoid social gatherings and stay in our various houses,

due to the spread of the virus.

I must commend the federal and state government levels

for the aggressive measures put in place to ensure the country’s safety.

But sir, the hunger in the land has finally reached my house.

“As I write this letter, I have just finished eating my last pot of soup

and there’s no hope for another one as my source of income has been put on hold until further notice.

“Your exellency sir, i have no more money to feed.

If you were in Lagos, I would have walked straight to your house and ask for food

because I stay in the same estate with you.

“I know I will be arrested by those mobile police officers in thier hundreds, assigned to your residence

after I must have shouted your name 3 times.

But sir, as long as I see you and ask for food to eat,

I don’t mind being purnished for hunger at this point.

“Finally sir, I just want to know if the relief packages sent out in envelopes by the federal government will reach this side of Lagos,

because your exellency sir, The Hunger on the way will be more than corona virus O! 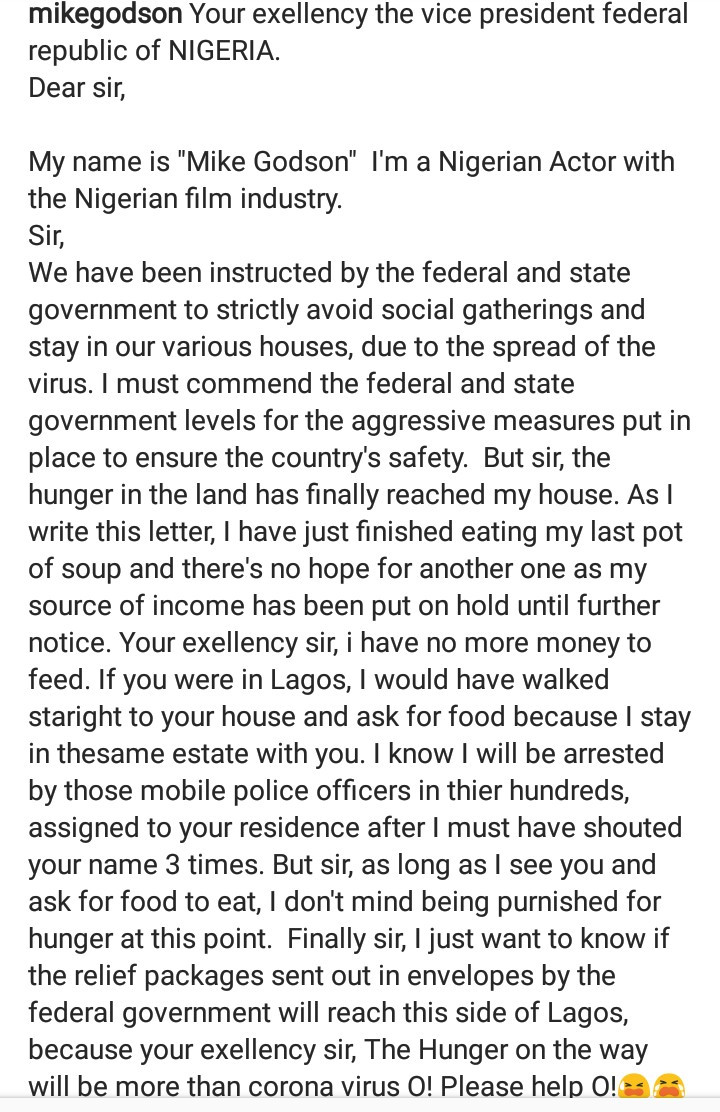 Fans of the actor further suggested donating for him food stuff and pots of soups and stew, but he refused.