The UK government has reacted to the drama which played out at the Federal High Court in Abuja on Friday December 6, just before Omoyele Sowore was arrested by operatives of the Department of State Services (DSS) while his trial was in session.
The British High Commission in Nigeria in its tweet disclosed that it is following Sowore’s detention closely. The commission also stated that respect for the rule of law and free and responsible speech is fundamental for democracy.
It added that the UK government is committed to defending and strengthening human rights worldwide.

“As we celebrate #HumanRightsDay, we encourage all political, state and non-state actors to uphold the ideals set out in the Universal Declaration of Human Rights, signed 71 years ago today.

“We are following closely the continued detention of #Sowore. Respect for the rule of law and free and responsible speech is fundamental for #democracy.

“The UK is committed to defending and strengthening human rights worldwide and, as we conclude #16DaysofActivism2019, working to end gender-based violence.” 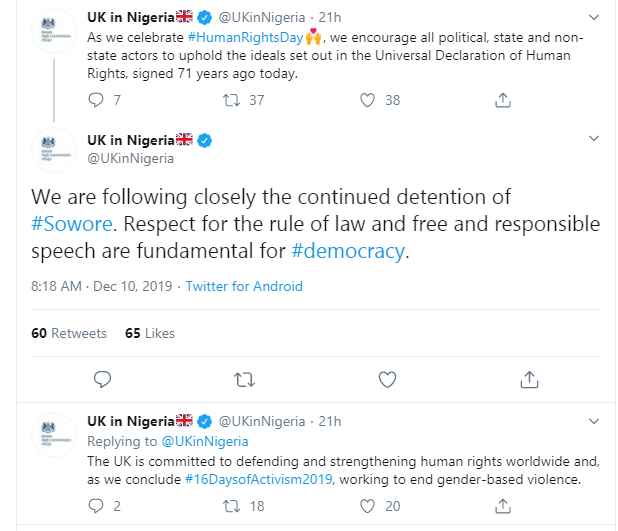 How to take control of bad habits and form healthy ones, according to science

Rihanna Breaks Up With Her Billionaire Boyfriend, Hassan Jameel After 3 Years Together

Stupidity Is When You Pay First Fruit Offering – Daddy Freeze

“I Prefer International Awards Because You Can’t Bribe Them Like Local...

How to take control of bad habits and form healthy ones,...

Legacy TV - January 18, 2020
0
For many, the beginning of a new year marks a fresh opportunity and renewed hope to address that the negative behaviours that control and...