A politician in Niger State has been charged and remanded in prison for purportedly directing ‘intentional insult’ at another resident of the state.

Court filings seen by PREMIUM TIMES said Abubakar Katcha was arraigned on December 24 in Minna, the state capital. His associates said he was remanded in the medium security prison in Minna because the magistrate declined to grant him bail.

He had honoured police invitation that morning, only for him to be driven to court and summarily charged for insulting a resident over the telephone.

The police invitation came days after Isah Lapeni, a resident of Minna, filed a police complaint on December 19. He alleged that Mr Katcha had called him by telephone “raining series of abuse on him.”

Mr Lapeni said he did not know why Mr Katcha called him to insult him, but felt his rights had been violated and reported the matter to the police. He did not allege a threat to life, court filings showed.

The police said Mr Katcha’s action constituted an “intentional insult” which could be punished under section 399 of the penal codes.

Mr Katcha denied the allegations and his lawyers immediately moved a motion for his bail. The magistrate, Ibrahim Shabafu, adjourned further hearing on Mr Katcha’s bail application until January 6, 2020.

The charges came three weeks after Mr Katcha was arraigned in Minna on a petition brought against him by the state governor, Sani Bello. The governor’s chief of staff had petitioned the police, alleging that Mr Katcha posted criticism of his principal on his Facebook page.

The charges said Mr Katcha accused the governor on Facebook of diverting public funds for private use amidst decaying road infrastructure. The police said Mr Katcha’s Facebook activities could “incite public interest” in the affairs of the state.

Mr Katcha’s associates said the fresh charges were part of the governor’s “desperate plots” to silence critics — even though there was no direct link unlike the earlier ones. They identified Mr Lapeni, who filed a complaint to the police, as being friends with the governor.

Messrs Katcha and Bello were erstwhile political ally, and once served in the same cabinet as commissioners in Niger State. They also both belong to the ruling All Progressives Congress, with Mr Katcha currently serving as a board member of the National Film and Video Censors Board. He was named to the position by President Buhari in February 2018.

“All this drama is because of Mr Katcha’s stance against corruption and how the state government has diverted money meant for public for personal gains,” said Shaba Katcha, a relative. “They can continue to use their proxies to attack him, but they will one day account for their deeds.” 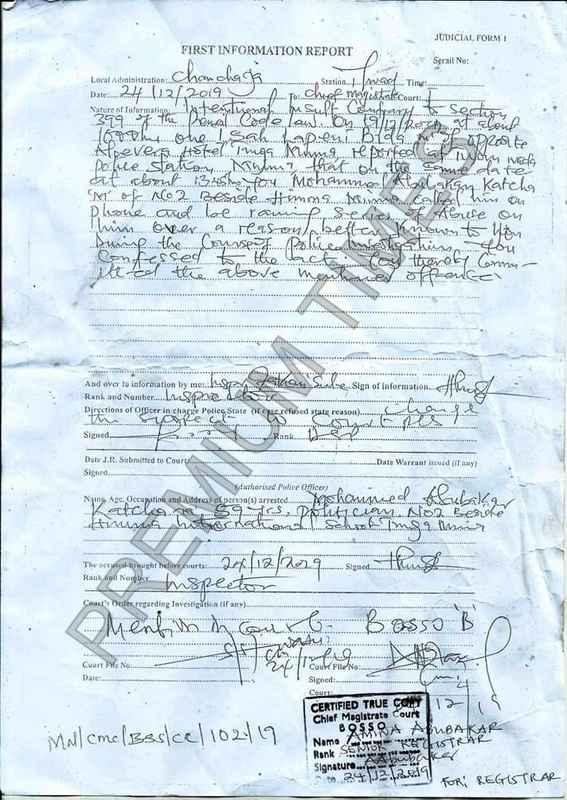 Shaba Katcha accused the police and the magistrate of being a part of the conspiracy to silent critics in Niger State, a plot he said seemed to be playing out well as many people have either stopped further criticism of the governor or left the state altogether.

A spokesperson for the governor, Mary Berje, declined comments about the latest charges against Mr Katcha.

Niger police spokesperson, Abubakar Daninna, said Mr Katcha committed a criminal offence by passing insult at another citizen, but that the police had not violated his rights by immediately charging him to court.

“There is an aggrieved party and the police had been satisfied that a criminal offence has been committed,” Mr Dannina told PREMIUM TIMES by telephone Sunday afternoon. “Intentional insult is a criminal offence, if not, the police will not take it up and charge it to court.”

Mr Katcha’s case with the governor underscores the worsening dimension of a widening web of attacks against free speech across the country. The enduring wave, which has claimed several journalists and social critics as victims, began shortly after Mr Buhari assumed power in May 2015, which coincided with when the draconian Cybercrime Act signed by his predecessor, Goodluck Jonathan, took effect.

How to take control of bad habits and form healthy ones, according to science

Rihanna Breaks Up With Her Billionaire Boyfriend, Hassan Jameel After 3 Years Together

Meghan Markle’s Father set to Testify Against Her in Court

Gambling With Credit Cards To Be Banned In UK

Obesity May Increases Risk of Cancer

Watch Hilarious Video of Davido and B’red in Church

How to take control of bad habits and form healthy ones,...

Legacy TV - January 18, 2020
0
For many, the beginning of a new year marks a fresh opportunity and renewed hope to address that the negative behaviours that control and...